The idea that the US government (or some section thereof) would stage a well-planned and equally well covered-up provocation as part of an information war against an enemy should surprise no one.

Preliminary report on the crash of flight MH17 full of holes, just like the plane 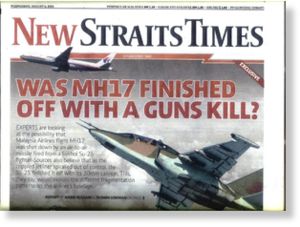 Western mainstream media whores are already jumping all over a single sentence in the Preliminary report [on the] Crash involving Malaysia Airlines Boeing 777-200 flight MH17, that reads:

Damage observed on the forward fuselage and cockpit section of the aircraft appears to indicate that there were impacts from a large number of high-energy objects from outside the aircraft.

According to paragons of bullshit like the BBC, this “pretty much rules out anything else other than a [BUK] missile”.

What the BBC and just about every other mouthpiece of Western anti-Russian propaganda are studiously ignoring is the evidence provided by Russia, which was corroborated by eyewitnesses, that fighter jets were in close approach to MH17 when it went down. And in case everyone forgot, high caliber bullets are also “high-energy objects”.

With any crime, the context in which it occurs is all important. The crash of MH17 and the death of all 298 people on board occurred in the context of a major ongoing propaganda war against Russia by Western governments that was launched in the aftermath of a US-sponsored coup in Ukraine bringing an anti-Russian government to power. This provoked Russia to facilitate the incorporation of Crimea into the Russian Federation and support the armed separatist movement in Eastern Ukraine. In short, the downing of MH17 occurred in the context of a major ‘world war’ between Russia and Western powers.