Another “once in a century” or “once in a lifetime” event. Pretty soon, everyone will have one of these! The dent in the floor. © KDKA

Mercer, Pennsylvania – There is a mystery surrounding a strange-looking rock that came crashing through the ceiling of a Mercer County business.

The object left a nice dent in the building’s cement floor where it landed, too. The owner of the company says he believes the rock could be a meteorite.

However, there’s been no official word as to exactly what the object is.

Heat map reveals every spot on Earth meteorites have hit 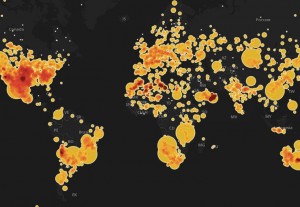 The map shows 34,513 recorded points on Earth that have been struck by meteorites since 2,300BC. As impressive as that figure might seem, it doesn’t include data for where meteorites that haven’t left any evidence, like every single one that landed in an ocean, or impact sites that haven’t been discovered yet.